Ready for the "Why I am doing a review" disclaimer?

It's pretty simple.  I received a sample in the mail.  Ages ago, I heard about Nutrish. It's a Rachael Ray product and it's a pretty darn awesome sounding pet food.  Buzzwords like "natural" and "grain-free" are associated with it and I was impressed.  Except for the fact that it was a dog food and I have no dog.  *sigh*
So I was THRILLED when just recently I saw a Facebook advertisement inviting me to sign up for my free sample of Rachael Ray's Nutrish for Cat!

So I did. It arrived today.  Now I'll tell you what I think of it.

Why?  Because that's how I roll. 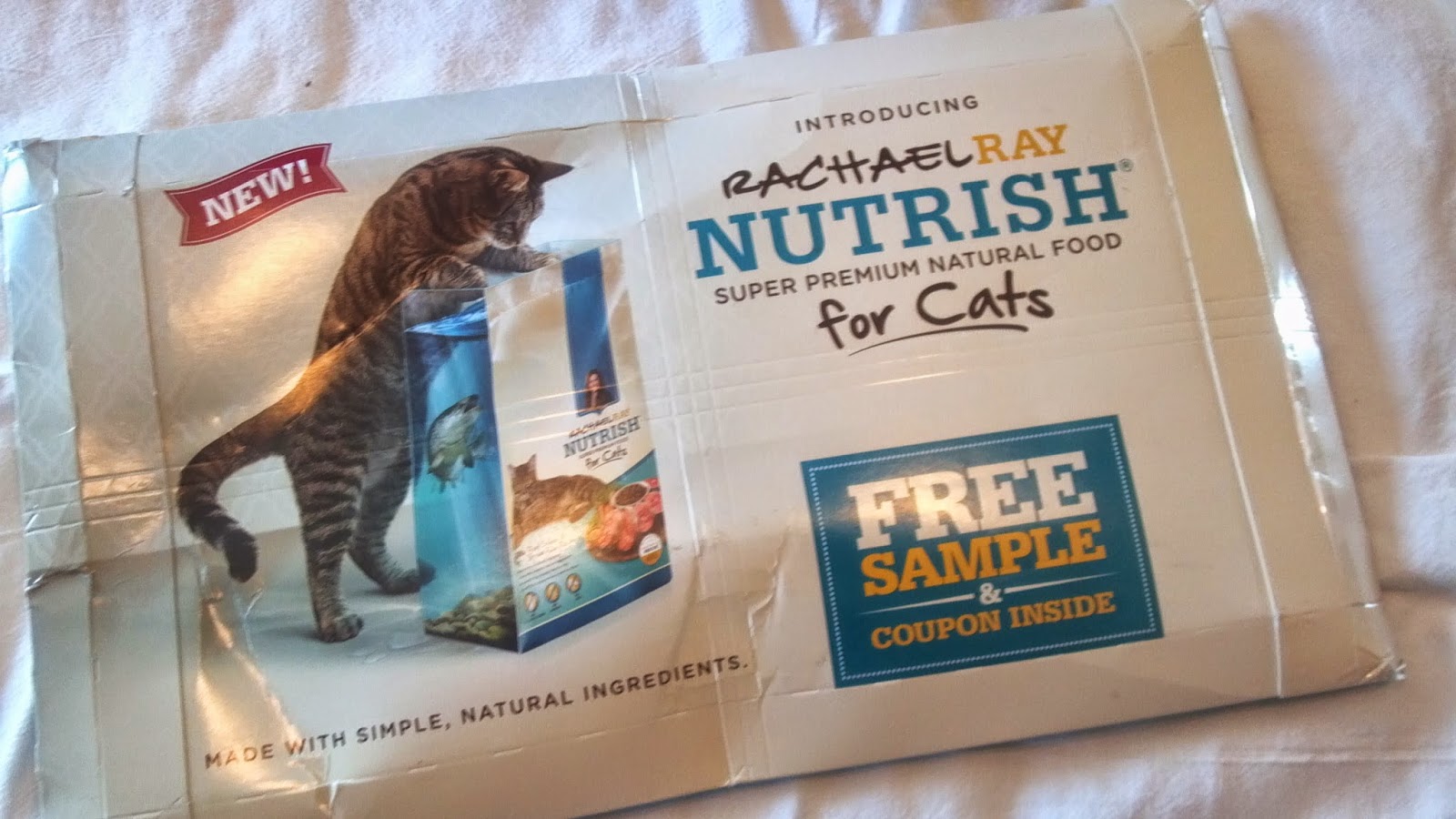 It's a lovely, big package! No skimping here. 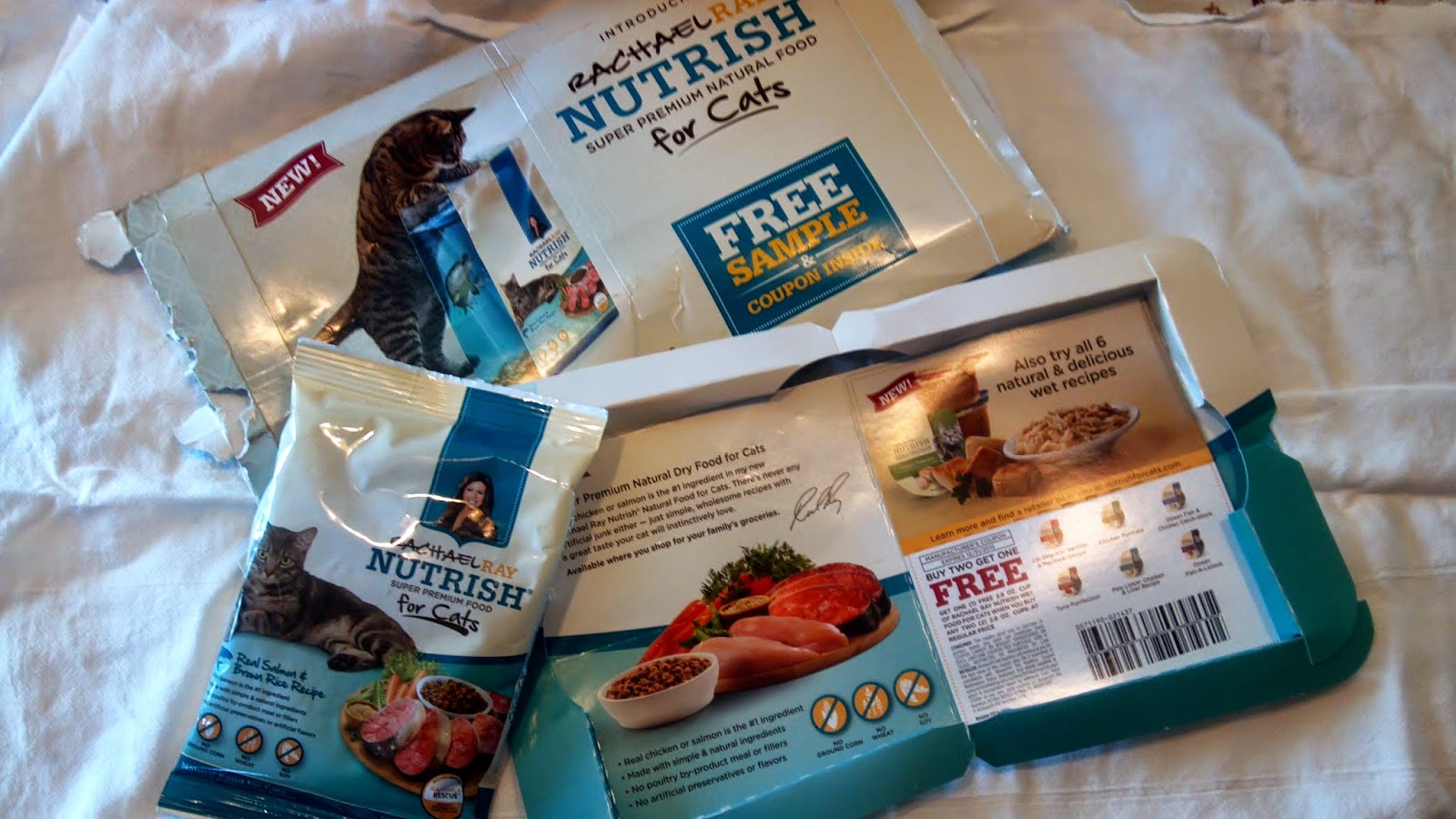 Food and coupons?  Don't mind if I DO. 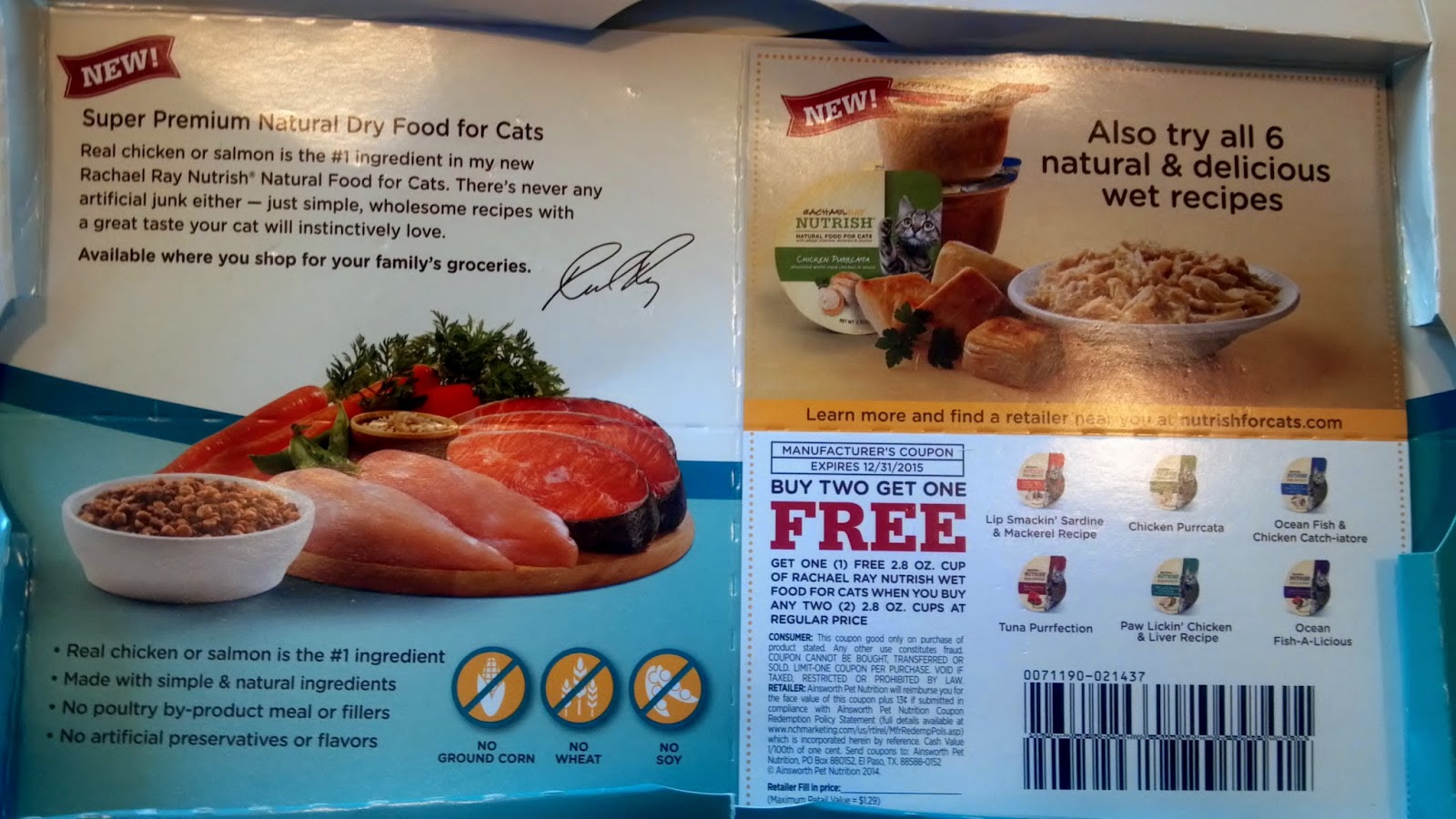 One of the coupons is for a wet food version of the Nutrish for cats.  I used the website to locate where I can locally find these pet foods and was quite disappointed.  The dry food is only available at Walmart.  This is a problem since I haven't visited either location in town for nearly five years do to the absolutely infuriating parking situation at both and the random nutjob customers at both.  Not that all customers are nutjobs but man, that store does seem to attract them.  The wet food?  Not available at all in my city.
So if I want it, I'm going to have to order on Amazon.
Not the worst thing ever. Just inconvenient.
I'm going to talk to my local grocery market about stocking the products. 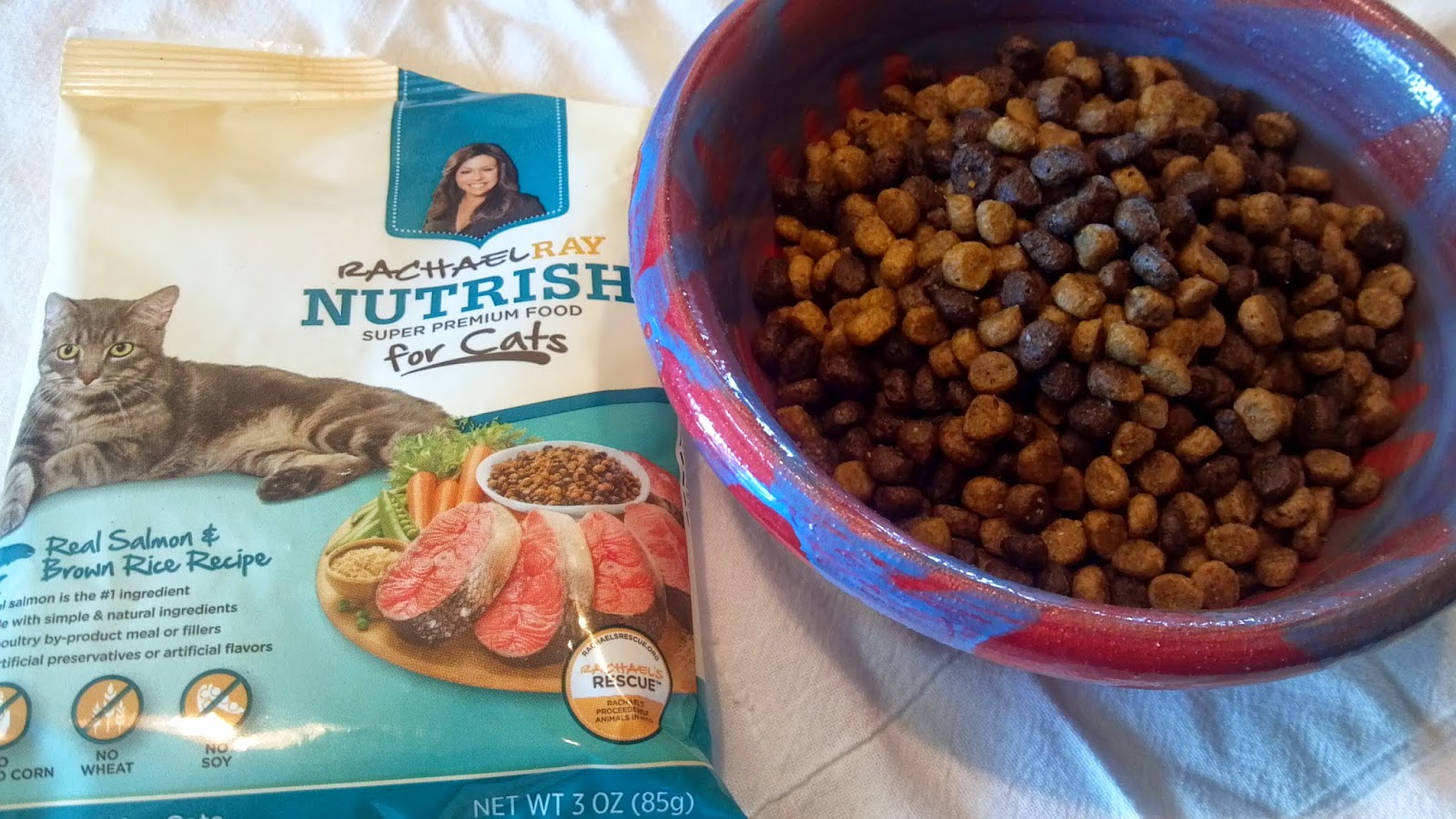 The sample was enough to fill an entire food bowl!
Now, I didn't want to risk bellyaches in the kittens, as that can happen when a sudden change to diet occurs, so I just offered it to them as a snack.
I set the food bowl down on the floor and then waited and watched. 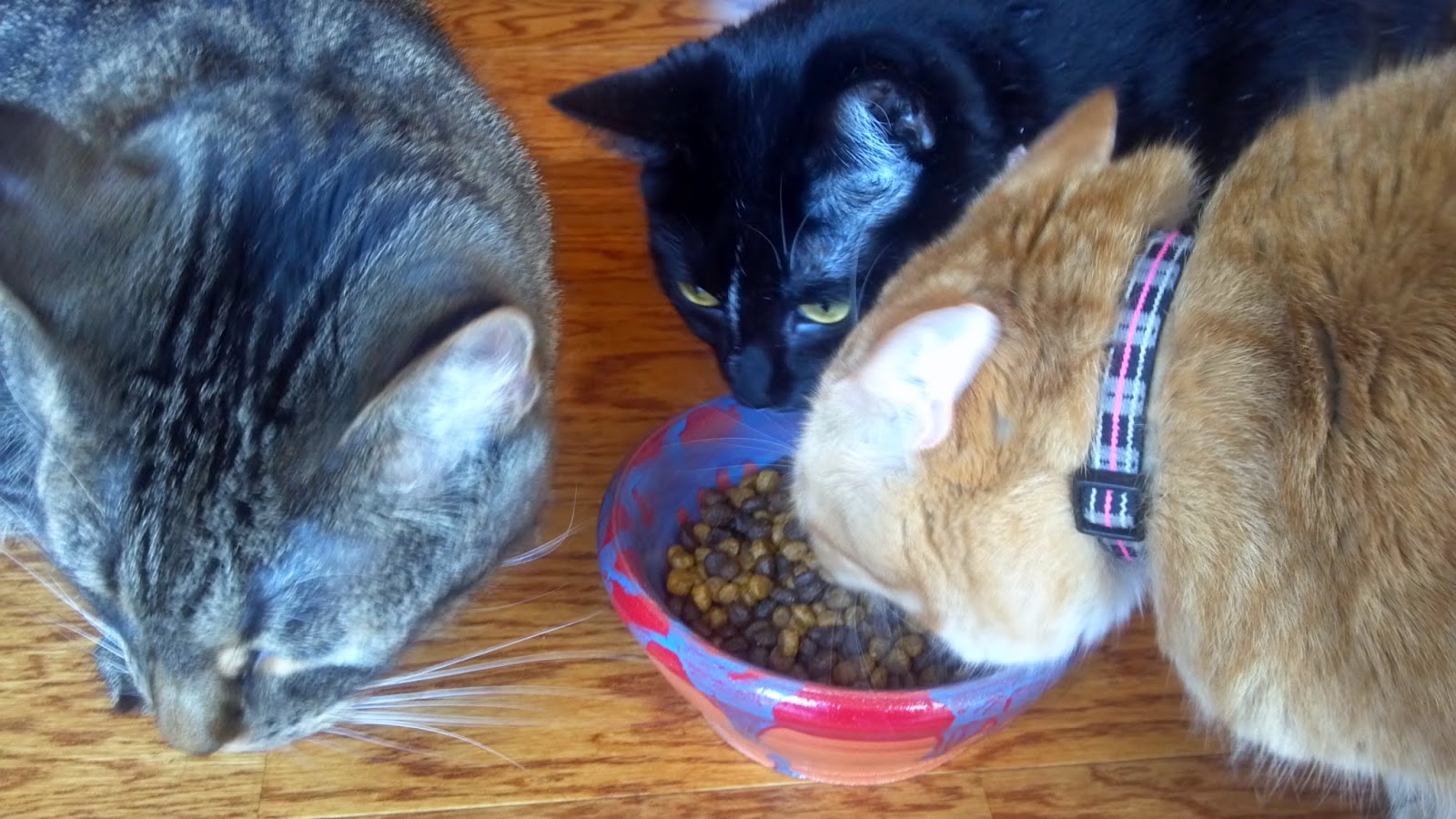 Curiosity was instantly piqued.  Everyone came over to investigate the strange offering in the bowl. 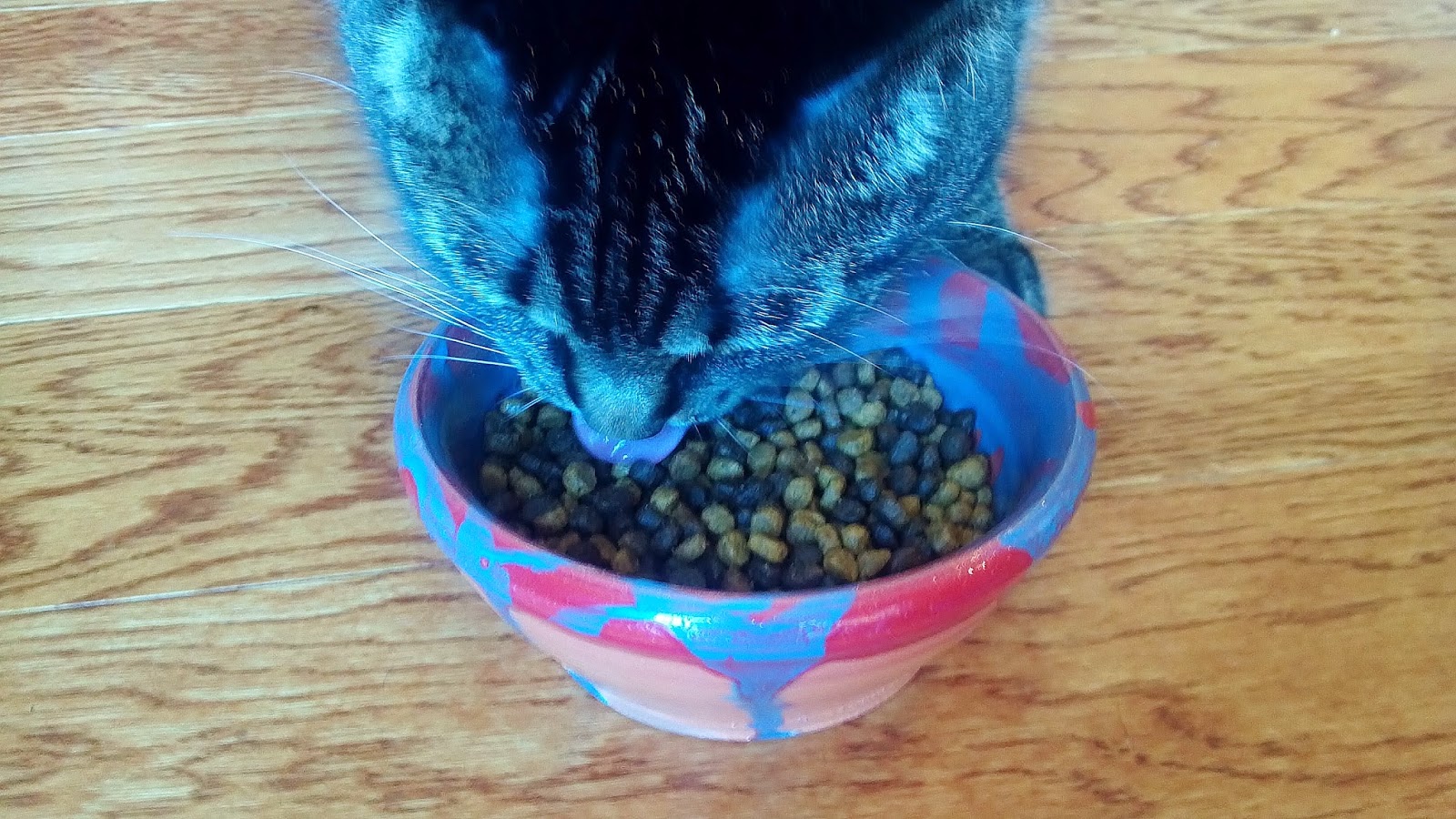 Lucy liked it!
Lucy is approaching six years old and is notorious in the house for disliking all cat foods (despite loving simple people foods).  After much research and sampling, that darn cat will only eat Purina Weight Loss Formula for dry food and Greenies for treats.  That's it.
Until now apparently.
She waited her turn patiently and then dug right in.  Definitely a winner with her! 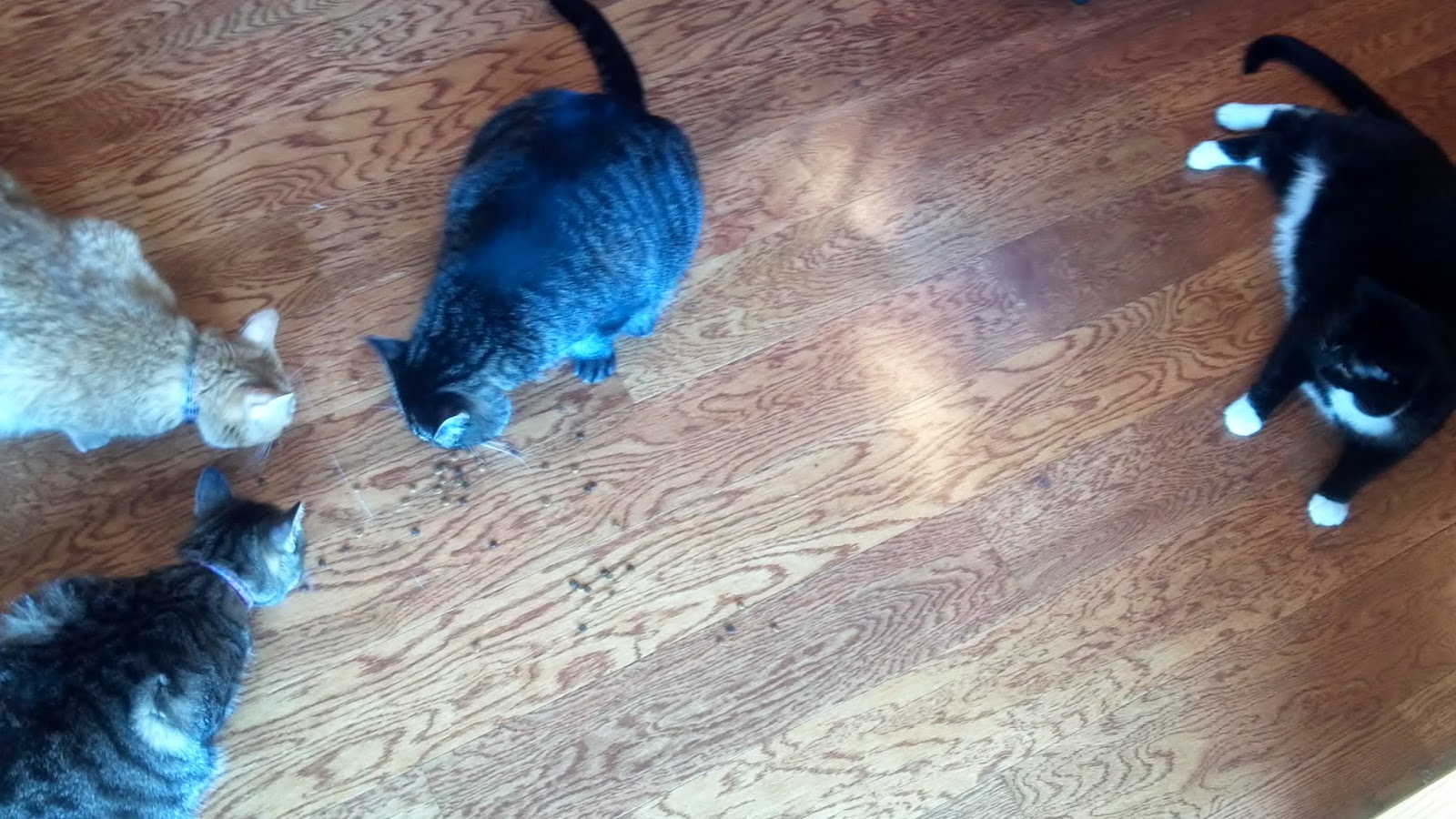 The official result can be seen above.
I spread a bit out on the floor and it's official:

My only concern was whether the food would sit well in the bellies of the beasts.

As you can see, the cats were in full-body bliss after eating.  It was like a post-Thanksgiving binge induced community nap.

If it was easier to find in South Dakota, I'd switch my cats to it exclusively and immediately.

The ingredients are great.  It's only fair that my cats eat as well as I do.

END DISCLAIMER:  Send me stuff, I'll review it.  I can't guarantee it'll be a favorable review, but it'll be honest.
Posted by Anna A. at 7:00 PM No comments:

Ready for the "Why I am doing a review" disclaimer?

So this lady on Facebook was offering free samples of something candle related and I'm all "I love free & I love smelly, girly crap!" So I shot her my address and she swung by with what you see in the pictures below.  All she asked was that I'd send her a sentence or two on Facebook detailing what I think of the products and that if it's favorable, she can use my words on her website as a testimonial.  So instead, I decided to do a full blog post.  Heck, I can be bought.  I won't lie but I'll gladly honestly review products in exchange for... well, products.  And cash.  I like cash.  OOH!  And cake.  Y'all know I love cake.

Pink Zebra.
This was all tucked into a large envelope and left between my storm and wooden door.
It's one of those "have a party and make money" businesses but also offers individual sales. 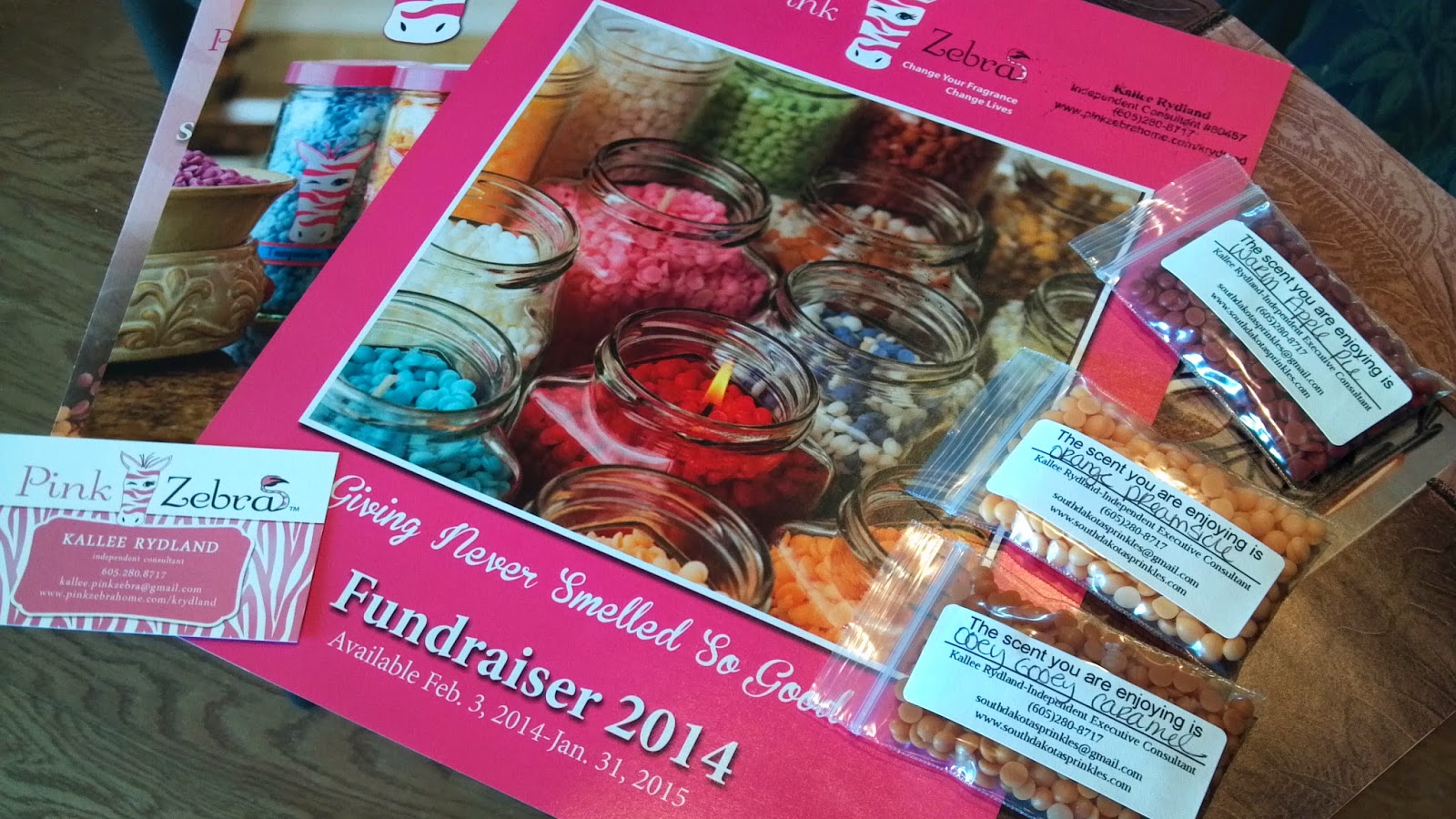 This business has multiple products available but really seems to be competing in the same market as other companies that sell those ceramic warmer things that melt a wax product that then smell-ifies your home in a positive way. 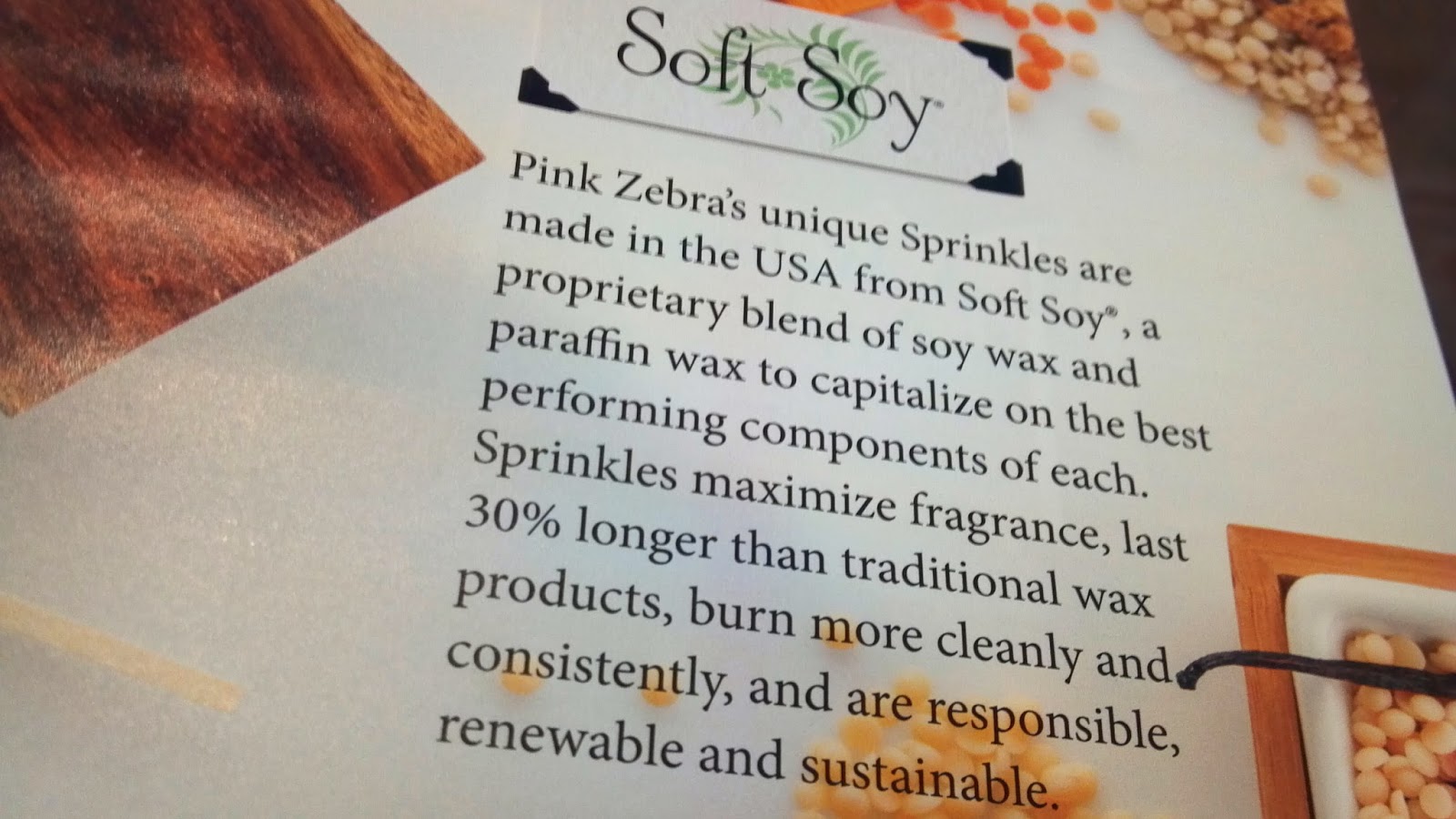 I can attest that "Sprinkles maximize fragrance."

Although I really don't know what other companies use, I do like that the product is made from soy and paraffin.  Traditional wax candles are so sooty.  I actually haven't burned one in years.  Plus, I have some resident cats that have me convinced that at least one of them WOULD figure out some way to burn the house down if an open flame was ever unattended for even a second. 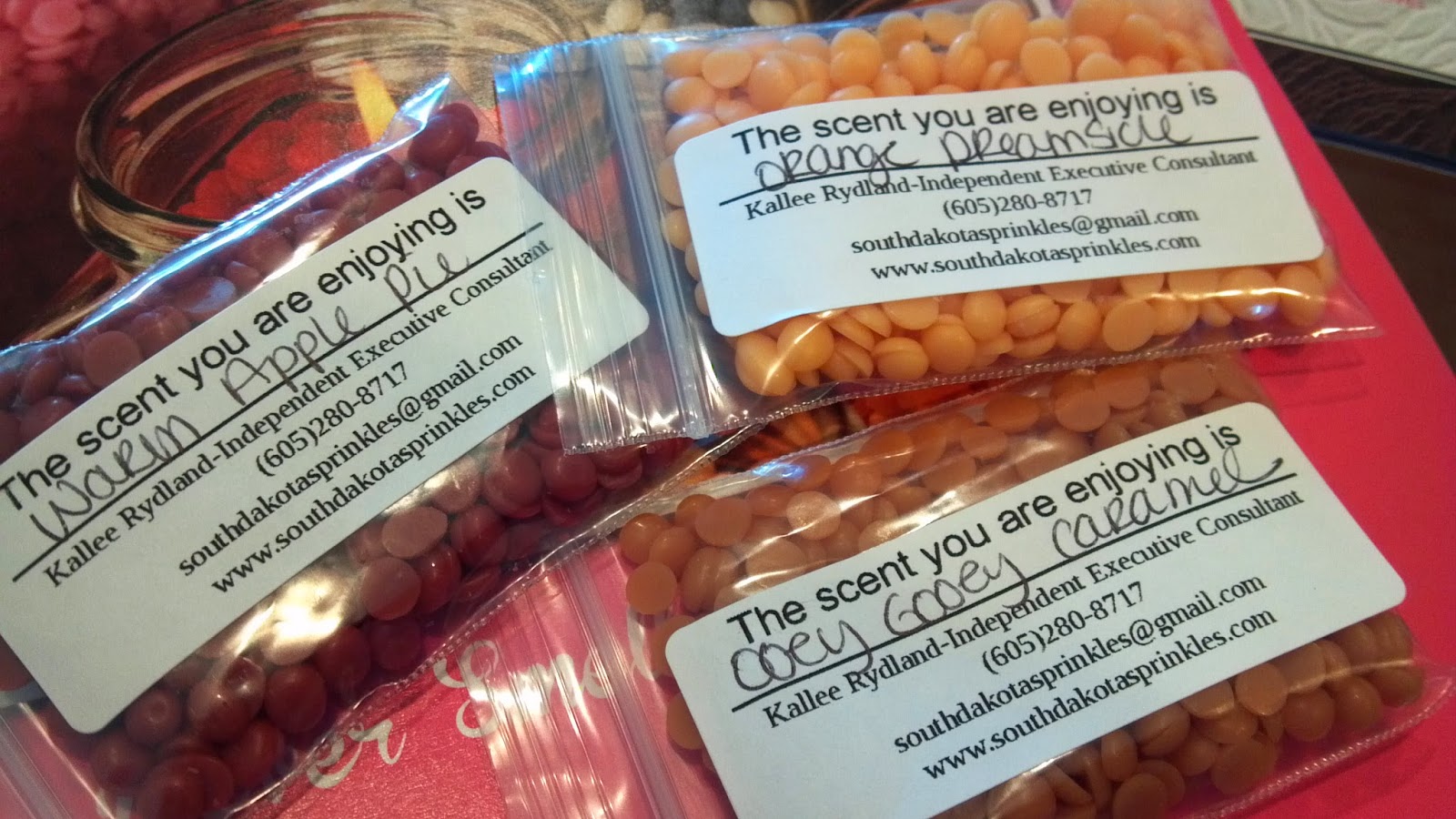 These are the scent I received to sample: Warm Apple Pie, Orange Dreamsicle, & Ooey Gooey Caramel.  Here are the cool things I discovered about these products:

*Putting Sprinkles on a warmer guarantees that your house will fill with deliciously wonderful smells.

*You can design your own scents!  I mixed the Warm Apple Pie and the Ooey Gooey Caramel Sprinkles together in a warmer and created the most wonderful Caramel Apple Pie scent.

*Bored with your old traditional candles?  I had a random old candle that was allegedly "citrus" scented.  A small sprinkle of the Orange Dreamsicle Sprinkles on top and it's like I have a completely new candle!

*There are wick kits available to turn your Sprinkles into your very own customized candle.  I'd love to try making one with layered sprinkles of multiple scents. 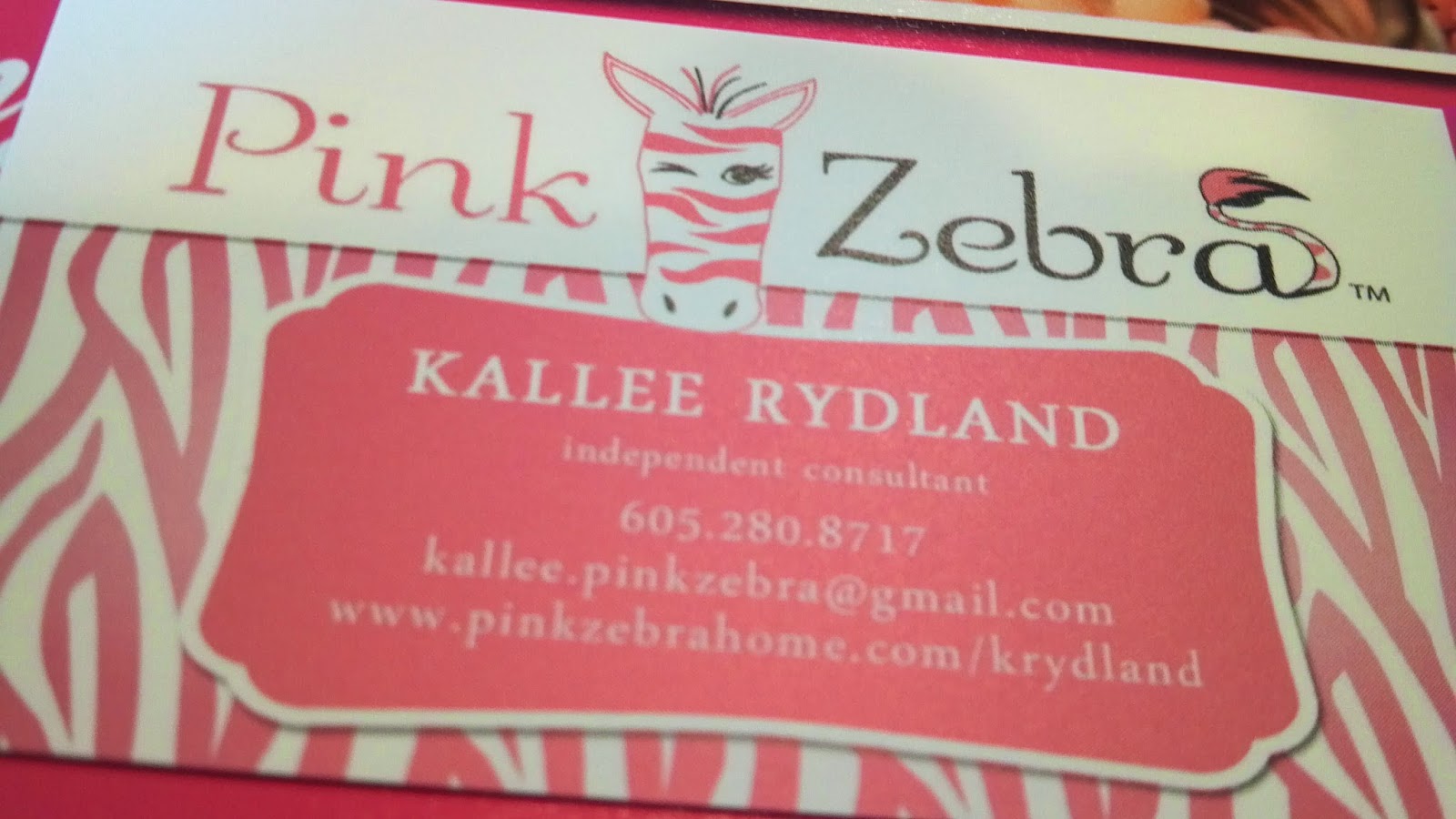 Above is the business card from the Pink Zebra consultant who provided me with the samples. If you're interesting in checking it, I'm sure she'd love an email from you.

The Wrap-Up:  I liked these products.  Actually, more than similar products.  Now, I've only had the samples for a week so it's a short-term judgment but I really think these Sprinkles are very nice and I'll definitely use them again in the future.
Posted by Anna A. at 12:39 PM No comments:

Not to say that people who stroll up Pikes Peak aren't real hikers.
Heck, WE went on that stroll ourselves and can attest to exactly how intense it can be. (Especially via the Crags)

No, not bashing others at all.  We're just starting to plan for some new hiking adventures that more closely resemble what I thought "hiker" meant as a small child.

Being raised mostly in Germany, I've been familiar with Volksmarch for pretty much my whole life.  So when my husband and I decided to start hiking here in America, I just saw it as the same thing I'd always done. 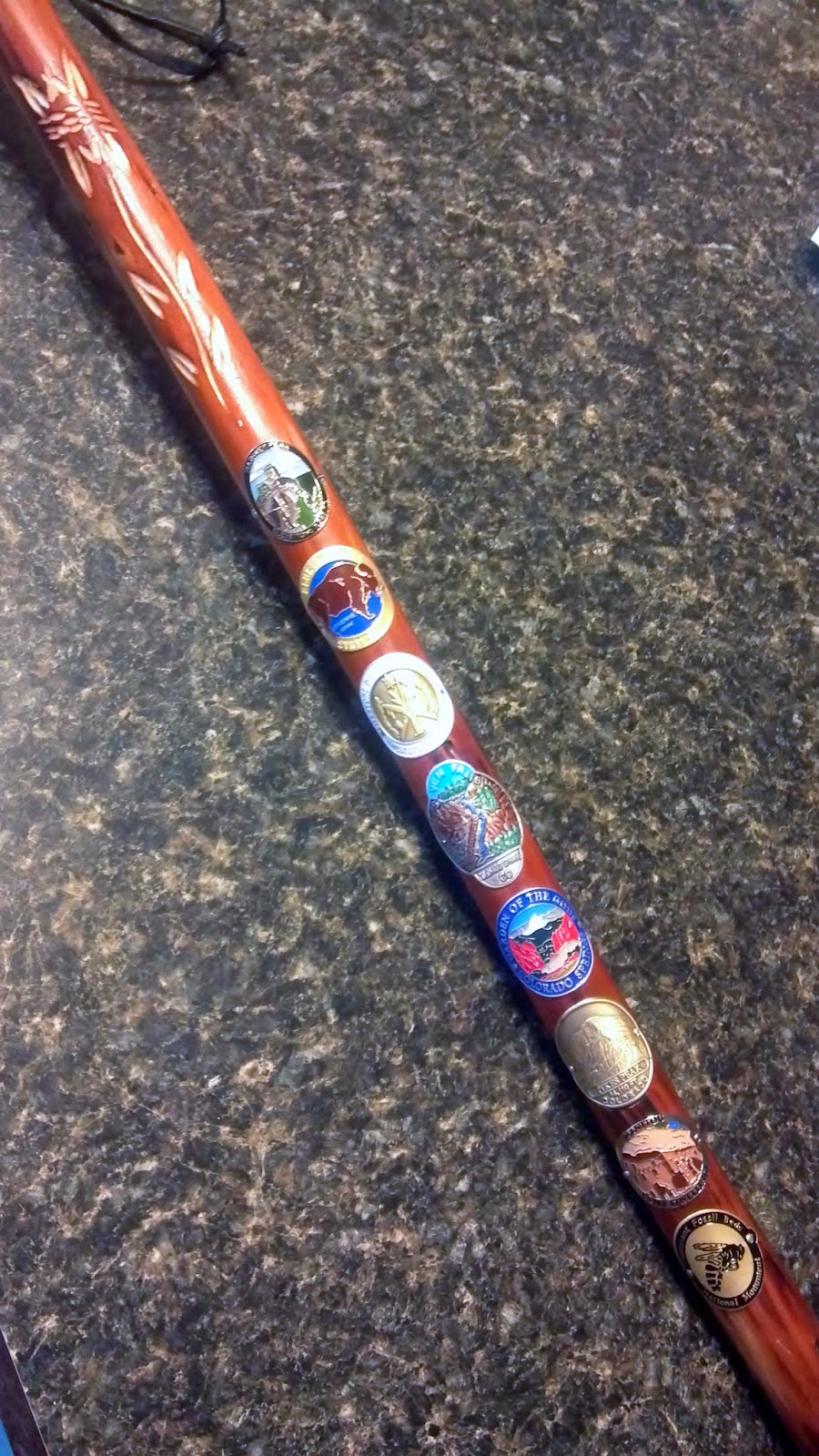 You grab your trusty hiking stick.
Load up a pack with water, snacks, and emergency items.
Head out on a five, ten, or twenty kilometer hike over varying terrain.
When you're done, you reward yourself with a nice meal and maybe a medallion for your stick.

But REAL hikers...  those are the stuff of my imagination and the reality of National Geographic Magazine.  I now know that the "real" hikers of my childhood have many names.  Thru-hikers, backpackers, trekkers, multi-day hikers, bushwhacking, and other terms are all what I'm thinking.

In my childhood, I dreamed about putting my whole life into a pack upon my back, heading out into the hills/prairies/mountains/valleys/jungles/deserts/whatever and not coming back until I found God.  Not in the literal sense of course.  Living off the land while being but a ghost through the terrain as I leave no trace of my passing.

I am to become my dream.

Baby steps of course, but a wonderful start.

My husband and I have begun amassing gear for our new adventure. 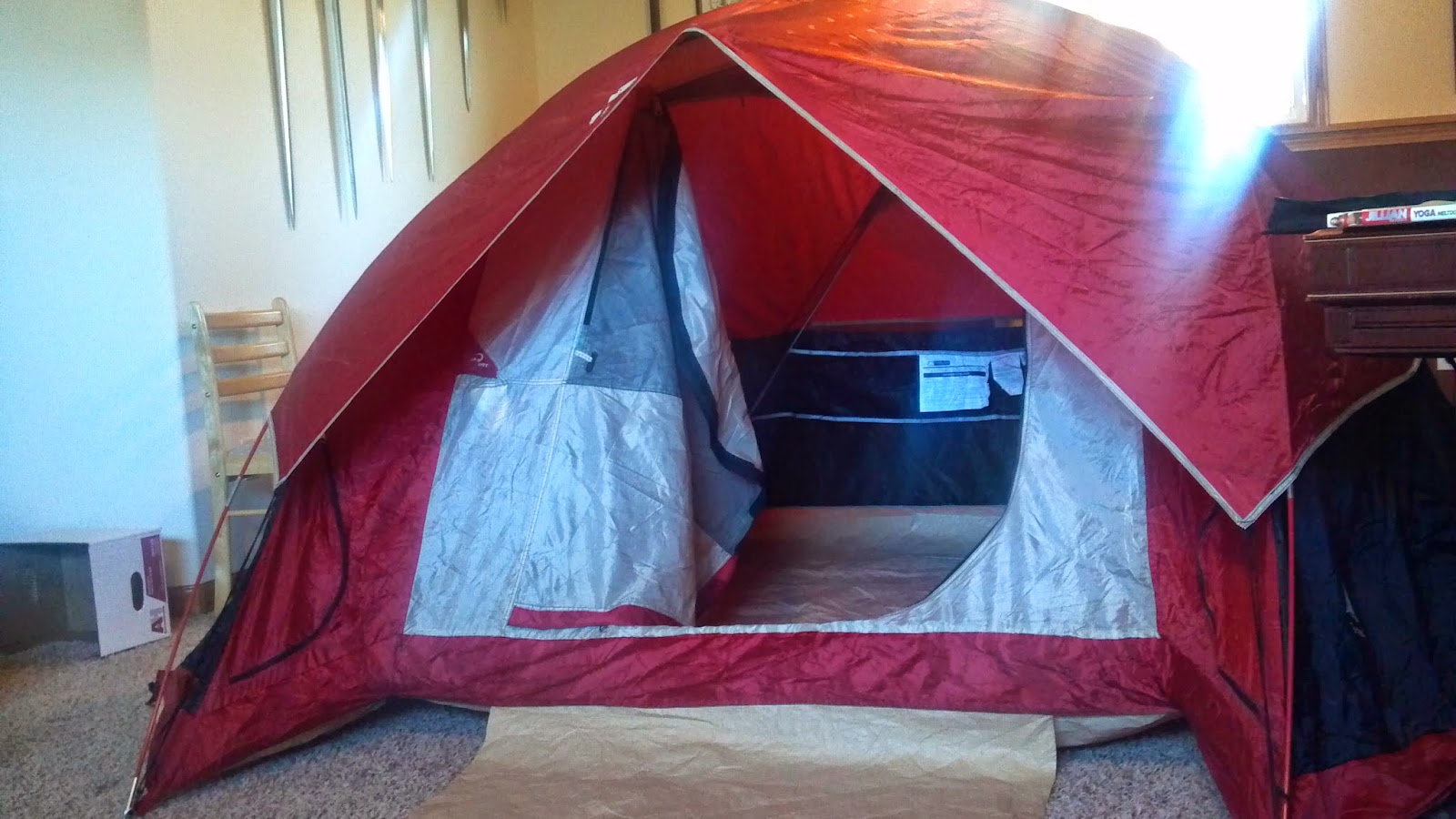 Most importantly, yes.  Yes, that is a tent in my living room.

A girl's gotta test things out before she uses them.  Gee guys!

We've got a lightweight backpacking tent that while not ideal (a tad heavy) it'll do until we can afford something a bit more portable.  It's not heavy at about seven and a half pounds but heavier than I'd like.  But who am I to argue with a deal?  Scored it for only $25.  I'll make it work.

Other than that, we've gotten a pack, eating utensils, and sleeping bag for the husband, some cooking gear, new carabiners (I'm addicted to anything that clips), some dehydrated prepackaged meals to try, a SteriPen (bought on an amazing Costco deal), a Buff headband, and mosquito nets.

I'm trying my darndest to not spend a billion dollars (since heaven knows we don't have even close) but I'd hate to go out with less than we need to comfortably survive.

Do you ever over-prepare or is it just me?
Posted by Anna A. at 6:21 PM No comments: 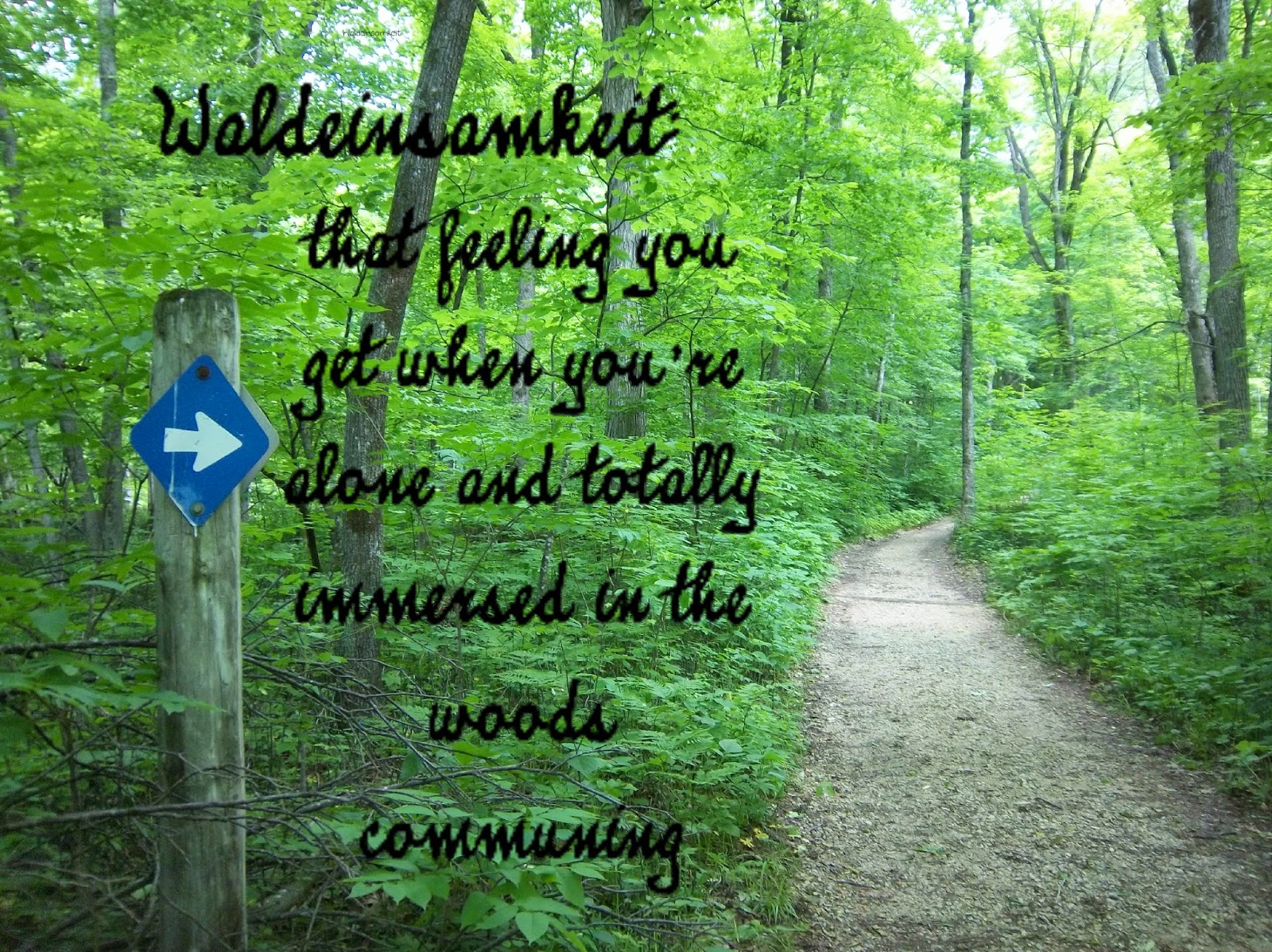 by Ralph Waldo Emerson
Posted by Anna A. at 6:52 AM No comments:

I... I Have Discovered My Name!

You know how at job interviews, self reflection type events, and even those random online quizzes ask you who you are?

Those Buzzfeed type quizzes are the best though!

All terribly thrilling and I'm sure... scientifically accurate.

The big thing is that they almost all ask a question where you have to pick a word that "represents you"/  That's TOUGH!  If I say "pretty" does that make me vain?  If I say "smart" is it because I think I'm better than everyone else?  Why do I have to just be one?  Isn't it possible that while I don't exceed the norm in any one are that I am indeed a bit smart, loyal, and sassy all at the same time?

ANYWAY...  the label for myself.  I found it today.  The perfect word for me.

I'm Going on an Adventure!

Nothing fancy at all.

My husband is off to Minneapolis on a business trip and I've been invited to tag along on this one.

We're renting a car thanks to his lovely company and going to make a mini vacation of it.  The drive up is about four hours and we're going to make a few stops along the way.

One stop at Cabella's to check some prices on backpacking gear.

One stop at REI to check out THEIR gear.
I'm uber-excited about this since they have SO many awesome things online that I want to see and touch in person.  Tents, packs, sleeping bags, and a whole bunch of other specialty stuff that I'll finally get to use next year.  Why?  I'll tell you about it in another post.  It's late now.  I still haven't packed.  Oops.

One stop at Nerstrand Big Woods State Park for a few hours of hiking.

Why?
Because I'm going on an adventure!!

Let Me Introduce You to My Latest Obsession

I love how you can make it as relaxing or an intense as you please depending upon how much you put into it. 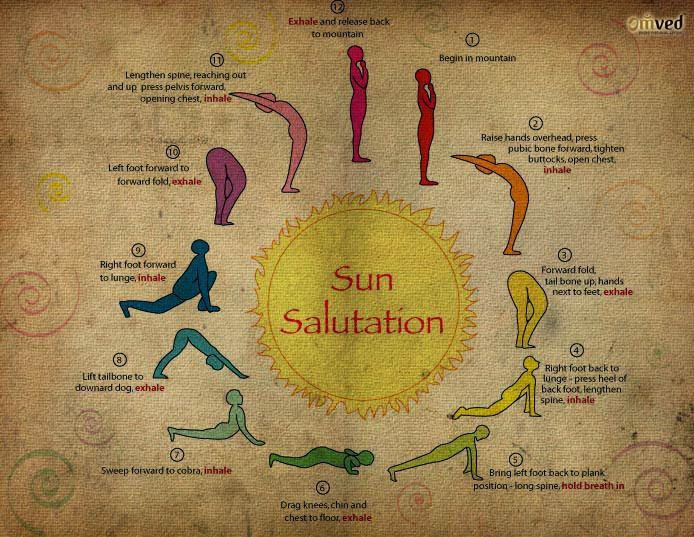 I feel like I surprise the teacher every time.  Like, she expects me to be a fat chick who is incapable of balancing my body for more than a few second, stretching beyond a basic bend, or even considering doing a semi-decent plank.

I can bend over and put my hands flat on the floor without bending my knees.
I can do full on push-ups like it's nobody's business.
I don't huff and puff as I change between poses.
and I can do this: 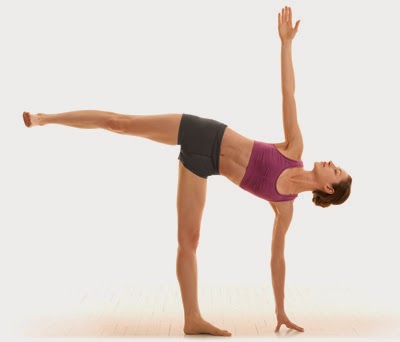 I can hold it for minutes at a time.

My next goal is Crow Pose.  Think I can do it? 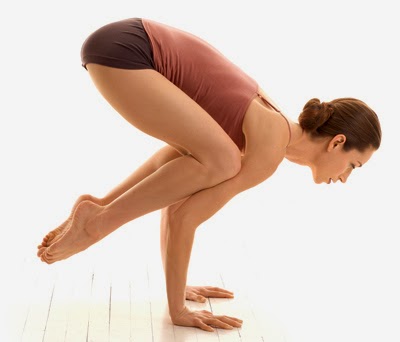 Anna A.
I'm trying to reshape my life by reshaping my body. The journey isn't easy, I'm trying to get strong enough, and all I really want to do is to destroy that fat chick that I see in the mirror each day. She's not real. She's not me. I want her gone.